With his two daughters ordered home from college and reoccupying the house, Elias Sutherstrom spent endless hours exercising in his garage. The NordicTrack made him feel like a marionette; it had been Francine’s machine and even she hadn’t taken it with her after the divorce. Elias favored the treadmill and the stationary bike. In the first two months of the quarantine, he binged his way through all eight seasons and 162 episodes of Magnum, P.I., a show he hadn’t watched since he was a teen.

Somewhere in season three, Elias caught himself playacting that he was Thomas Magnum. Though in his fifties, Elias was still tall and athletic and could have played Tom Selleck’s body double once upon a time. Elias even had a similarly hirsute chest, though grayer and, until recently, never so unbuttoned. In addition to favoring shorts and his most floral shirts, Elias began internalizing Magnum’s mannerisms, from the head tilts to the way in which Thomas opened a bottle of beer, which he drank often, but not too often to be a problem. Elias began to dream as Thomas, too. By the end of the third month of staying bored at home, Elias had even grown a respectable mustache. Everything was going to be all right. Everything worked out for Thomas Magnum.

He and Francine had thrown out the girls’ beds when they’d left for college, so for now, the girls slept on new mattresses on the floor and did their schoolwork on fold-out tables that hadn’t been used since their high school graduation party. It made them seem poor, which they all were, now. Elias had felt secure at the year’s start, but work had vanished and his retirement fund had shrunk to nothing, so, financially, he was just like Magnum; always short, always owing. Elias hadn’t yet thrown a fit or shed tears over having incurred such a madness of loss, not when everyone was in the same proverbial boat. It was futile to rage against the new status quo. Instead, the personal disaster had gone inward, waiting.

Stuck at home, his daughters were invariably on their laptops or their phones, their faces trapped in a Brady Bunch layout of classmates, friends, professors, lovers—he didn’t want to know more. His daughters put him on one of their group video chats, and he waved and said hello, startled to find that Thomas Magnum, circa 1985, wasn’t simply waving back at him, but was him. Elias wasn’t wearing his reading glasses, so he knew this contributed to the hallucination, but it still gave him an easy calm that he rather enjoyed. He giggled and his daughters pushed him aside and out of view.

He began to leave the house daily, before dawn. He walked the river trail to the beach and got a swim in on most mornings. He was issued a ticket, twice, for violating the beach closure. The third time it happened, he kidded with the young officer, then acted surprised when he was still cited. He became bellicose and petulant, finally taking the citation with a sigh—typical Thomas.

With each swim, the persona of Elias Sutherstrom began to slip away. In his endless crawl, he began to forget that the world was hiding from a microscopic adversary. When the city padlocked access to the river trail, he began making his way down foggy residential streets to the beach. He spotted a red Ferrari 308 GTS in an alley one morning and, feeling awash in good fortune, hopped into the car. The Ferrari was far from new; there were scuffs amid the swirl of its last polish, and wear on the seats. But those could be repaired. He wanted to take it for a drive, but the battery was probably dead, even if he had the key. He wondered if he should begin buying up car batteries. Once everyone was allowed to return to what work remained, batteries would be in high demand. He’d be there, with plenty of stock and high prices. But this was an Elias Sutherstrom thought, small and stagnant and of the past.

A day after a heavy rain, with the ocean looking too rough for a swim, he walked along the beach in his tank top, his hair getting curly and a little long under his baseball cap. His pace brought him up along a woman walking the same direction. Like him, she wasn’t wearing a mask. She didn’t move away, either, and seemed unconcerned with social distancing.

“Thomas.” They walked together for a long minute.

“This is going to sound strange, Thomas. But, can I…can I ask for a hug?”

“That isn’t strange at all.” He gave her a hug and held the back of her head in the palm of his hand and planted on her temple one of those peculiar little kisses that he gave just about every woman who sought consolation in his embrace.

“Thank you,” she said. “I needed that.” She said goodbye and he watched her jog off, the rising sun on her back. It felt like he and April were the only two people alive. He tilted his head and watched her go before turning and heading home. He hopped the fence to the river trail and walked along the water, the air so crisp and clear that he could see straight to the mountain snows.

He saw April again the next week, and they hugged once more. And several times the following week, too. But it soon became a bit of a pain to be all set to go for a swim but have to stop and give April a hug first, this woman who only wanted generic human contact, not him, specifically. Thomas Magnum didn’t appreciate being used. He switched to the beach on the other side of the breakwater.

On the internet, he learned to hot-wire a Ferrari. He was successful on his second attempt and, seeing that the tank was low, his first stop was at a gas station. He gladly paid near nothing at the pump. Filling the tank while the engine was still running felt both reckless and the right way to live. He didn’t let the Ferrari get to his head, though. He wasn’t a materialist and would just as soon drive any old car, as long as it got him where he wanted to go. He drove the Ferrari up and down Pacific Coast Highway for an hour and then parked it right where he’d left it. No one seemed to notice its absence. He assumed the owner was quarantining elsewhere—one of those second-home escapees.

Leaving the Ferrari, he felt a moment of unwelcome clarity: might he be taking his obsession with Thomas Magnum too far? But was it so bad to wish to be a fictional character in a fictional world, where danger didn’t come at you through divorce papers and doubtless bankruptcy, but via guard dogs, hired muscle, and simple physical one-on-ones you could recover from in just a couple of days, like being hit with a cold with limited ambitions?

He shaved his head, then his mustache, before he got in too deep. The pale stripe above his lips took forever to disappear into his tan. At first, he felt as though he was impersonating Elias Sutherstrom. By the time he felt he had the role down again, things in the wider world had soured so completely that stepping back into reality felt a mistake. At home, the girls had dropped out of college rather than take on more debt for an education that was basically glorified correspondence school. His ex-wife had moved back in out of financial necessity. He slept out in the garage now, and called it the guesthouse.

The pull of fantasy was too great. He rewatched all eight seasons of Magnum, P.I. He let his hair grow back. He regrew his mustache. He stayed as far from Francine as possible and continued to slip out before dawn, walking the empty residential streets, trying to remember where he’d last seen the Ferrari. He’d take it for another spin, perhaps find April and take her on a ride down the coast for the simple pleasure of driving. The skies were so clean and blankly blue these days that anything seemed possible.

At the beach, he pulled off his tank top, set aside his sandals, and plunged into the waves. He ventured out to where the water was so cold it was delightful, far beyond the reach of even the pier. He was so far out that, from shore, he could be mistaken for a sea lion or a dolphin. He felt no fear. This saltwater embrace was the only thing he knew for certain wouldn’t sink him. And later, when tired and headed back, the waves eased him forward and onto the soft shore, lovingly. And there was April. 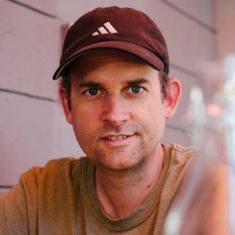