Sometimes I count sheep. They run unimpeded through wooden yards, I tally them as they squeeze through open gates. Timber rails have been wiped smooth and frictionless by generation upon generation of lanolin-soaked wool sliding along their hardwood lengths. The air is saturated with dust, a potent mixture of powdered earth and stale sheep shit. It sits at the back of my throat like smoke. Perhaps I should wear a mask. The incessant yelp of the dog flints the tinder dry breeze.

Counting sheep isn’t always easy. There’s that old joke that it puts you to sleep, but I’ve never found that to be a problem. Working around animals as flighty and unpredictable as sheep is invigorating, the last thing I want to do at night is run them through my head in an attempt to relax. And I find more and more these days that I need to relax. Even out here, sequestered deep in the wide-open isolation of the farm, news seeps in from the outside world.

There’s also the problem that all sheep look the same. Number 1 is the same as number 2; number 3 slips in front of number 4; number 5, no wait that’s number 6, or number 7… Every individual becomes a blur of wool, a smudged vanilla whip surging, churning en masse through the narrow gap. The solid thump of muscle and gristle grinds relentlessly, a swift current of sinew and fibre.

Even the word sheep gives no clue as to the final number. One sheep. Many sheep. Two sheep. A thousand sheep. They form a dense throng of sentience when packed together. I can’t tell one from the other.

But when separated, it becomes easier to identify each individual animal. That one with the small black spot on her leg? I rescued her from the gorse bush on the riverbank. The one with the floppy ear is the orphan I found a new mother for. That sheep there, with the faraway look in her eyes, she keeps slipping through the boundary fence in search of new horizons. There is an abundance of stories here, but they tend to get lost in the flock.

If I’ve learnt one thing recently, it is this: Increase the gaps between individuals and their stories become clearer.

The sun stretches five lifetimes across the paddocks round here, presiding over a big sky and unsculpted clouds that pile up along the Tararua Ranges. The westerly blows unimpeded from the coast, on its way to wherever wind is going, and doesn’t stop to ask for directions.

A black-and-white border collie that answers to the name Sam runs in front of my quad bike as we follow another mob of sheep along a track dotted with river-smooth stones. The moon is still in the sky, making waves, unwilling to release its grip and yield to the morning.

A hawk sweeps low across the rank grass, its wings seem to occupy that thin strip between wind and light. The squat shape of a hare rears up from where it has been hidden, tall ears like blades in the sun. The hawk pirouettes and drops towards its exposed prey. The hare bats at its assailant with front paws, adopting the slightly stooped pose of a tired pugilist. Again and again the hawk attacks, but the hare stands its ground. Tiny droplets of dew cascade from brown feathers and scatter over the grass like a sudden squall. The hawk flaps its wings twice to gain altitude and momentum, attains lift from the open paddock as the sun heats soil and grass. It folds and darts violently.

But not the sheep. For some of them, this will be their final trip. Sam is already moving them through the open gate of the yards. I leave the hawk and hare, gun my bike into action and catch up just as Sam finishes his job. I’m sure he would shut the gate too, if only he had opposable thumbs.

There is a greater awareness of silence during lockdown. No planes splitting the taut belly of the sky, no visits from stock agents and fertiliser salesmen. There is also an appreciation that people need to eat. They’re scattered thinly out there, like stick figures scratched in the sand, clustered in bubbles and not able to work. Unsure where all of this is heading. I feel gratitude that I can keep working, that what I’m doing is essential to the lives of so many.

Warm breath fogs the air as sheep churn together in the yards. Steam rises from their backs, combining with the morning light, throwing patterns that disperse in the strengthening sun. The moon takes one last look and finally dips below the horizon, dragging the night across a different part of the world. Some of these sheep may end up chasing it. There is no way to sugar-coat the fact that they are destined for dinner plates around the world. But not yet. Right now, while they are still on the farm, they are in my care. They are alive. They are breathing. They are sentient individuals.

Some of these lambs were born here. I helped them survive those first few hours and days when nature did everything it could to make life difficult. Livestock farming is full of contradictions. I give life and I take it away, all in the name of food production. That can be a powerful and motivating thought. Somewhere, someone is probably eating or digesting something I grew. Something I raised. Something I gave life to.

It is a huge responsibility.

I am the fifth generation of our family to farm this piece of land. My great-great-grandfather purchased the land in 1906. I wonder what he would think of some of our methods now. My father just turned 81-years-old, and my brother and I now do all of the work. My nephew, a chef by trade, is keen to join us. He will be the sixth generation to farm here.

Our stories intertwine with everything around us. I am surrounded by stories. Every individual animal has a story. The sheep. The magpies. The rowdy spur-winged plovers that swing circuits around the paddocks, screaming like banshees. Stories exist wherever I look. There is a narrative that runs through the land, the soil. The smooth stones on the track started their journey high in the Ruahine Ranges, eroded and weathered by a river that is itself part of a bigger system. Every post and batten, every board in the woolshed wall, has come from a tree grown in soil that had its origins millions of years in the past.

The food I produce will go to creating other stories, stories involving people I may never meet, in places I may never visit, stories I may never hear. Great stories, small victories, unspeakable tragedies, indescribable joy. History will be written. 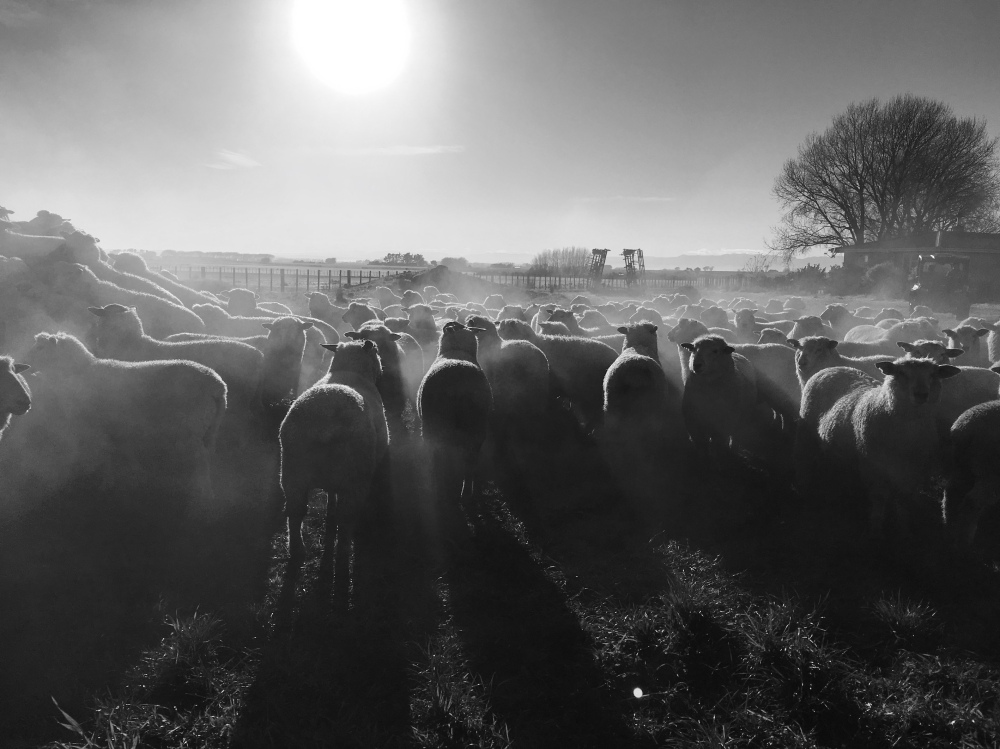 I watch the lambs swirl in the yards. Sometimes I feel a sadness creep over me, especially when I think of food wastage. I grew up amongst sheep and cattle, and we ate meat every night. We had a connection to the land and livestock, a respect and gratefulness for the food we consumed and the dignity of the animals. The idea that meat came from living creatures was instilled in us. They weren’t just a word on a menu or an ingredient on a list. By reducing them to words such as “beef” or “succulent”, we strip them of their identity.

I wonder if this lockdown, this pandemic, will change the way we eat. The way we view food. We are in the unique position in this country to produce ethically raised food that is free range and grass fed. That is our strong point. Our story. But as consumers, it is important that we are mindful about what we eat. How much we demand. Remember what it is, where it came from. Give it the respect it deserves.

Sam leans against my leg, shelters from the westerly that shows no sign of abating. I wonder how many other stories the wind will touch before it reaches its final destination.

Animals surround me every day, remind me of the processes of water and weather that grow the crops and the grass that sustains them. Sustains us. The unseen narrative of nature, the millions of years of processes that have shaped this land we walk on. The idea that all of this takes place, and yet meat will still be wasted and a living creature will give its life for nothing, is a sorrowful thought.

I watch as the sheep jostle for position in the yards. There’s no social distancing round here, just a perpetual shifting of place. A constant scramble as stories smear themselves into a solid flock, a seething sum of many narratives.

And they’re a bastard to count.

Tim Saunders farms sheep and beef near Palmerston North. He has had poetry and short stories published in Turbine|Kapohau, takahē, Landfall, Poetry NZ Yearbook and Flash Frontier. He won the 2018 Mindfood Magazine Short Story Competition, and placed third in the 2019 and 2020 National Flash Fiction Day Awards. His book, This Farming Life, was published by Allen & Unwin in August, 2020.