What the butterfly whispered to the turtle by Jade-Ceres Violet Dolor Munoz, with art ‘She Weeps’ by her daughter, age 8

I have come to drink your tears.
And take within me your sorrow.
To carry your burden like my own
And lighten the load you bear.

I have come to drink your tears.
To sip away the saltiness you shed.
So in its place may once again blossom
The sweetness you’ve hidden away.

I have come to drink your tears.
To remind you that you are not alone.
Even when you feel like the world
Has abandoned you, I have not.

I have come to drink your tears.
So you can be fragile
When you need to be
Without hiding your vulnerability.

I have come to drink your tears.
Because I understand that you
need help getting through this
And I will not give up on you.

‘She Weeps’ is a collaboration between Jade-Ceres Munoz and her 8-year-old daughter Paris Alexandra Munoz. Jade created the base drawing while she and Paris painted the artwork using coffee on an A4 paper. The idea for the artwork came about when Paris was thinking about how Mother Nature must feel amid the global pandemic.

Winter cleanses the tropical sky.
In a night akin – stars fall, he has seen.
The house tree, one that his father
began and he let sprawl to embrace all –
the house itself and everything within
has lost the ghost it used to host.
Everything goes. Even the haunting.
Even the words that he should receive
from his memory. Winter bare bone
of the sky is dug up by some canine instinct
to be buried again as if he must know
what he forgets and know for sure – all
details have been obliterated.

The year I misread
Crocodilus for Coronavirus,
I decided to make needles.
Not to kill time. Not only.
I needed to feel close to early men,
to tools of meteoric iron,
bones,
gear of magic,
not sterilized but clean,
ways to keep
my filthy hands at bay.

The postman seemed like a messenger
from a galaxy whose language
I used to speak but forgot.

Objects to finger, to fidget with, to stroke, to pamper,
eventually they might purr.

In my dream, needles were rinsed
after scouring.
I placed them to dry in revolving barrels
with bran or sawdust.

I browsed
how to this, how to that,
Needles for Dummies,
another rendezvous with my postman.

Betweens and blunts are quite like sharps
but shorter,
tailors prefer them:
they sew faster
with a tiny, strong needle.

I imagined what I could cross-stitch
using these needles, labour of love, no,
labour of suspense,

The tools ended up in my cellar,
never used but groped and fondled
stash.

I washed and rewashed my hands
after taking a shower.

I bought sanitizers by the dozen.

My friend, the postie, winked at me on the run.

lockdown
knowing, not knowing
your neighbours

social distancing
measuring the space
between us 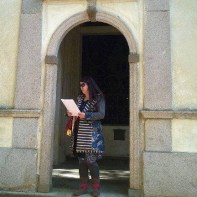 Agnes Marton is a Hungarian-born poet, writer, librettist, Fellow of the Royal Society of Arts (UK), Reviews Editor at The Ofi Press, Art Curator at One Hand Clapping Magazine. Recent publications include her collection Captain Fly’s Bucket List and four chapbooks with Moria Books (USA). She won the National Poetry Day Competition in the UK. 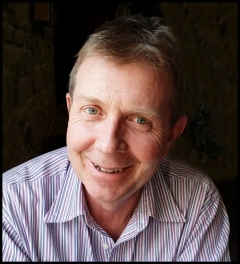 Ron C. Moss lives in Tasmania and has been writing haiku and related genres since 1999. He is also a visual artist and award¬-winning photographer, often combining his poetry and art online and in various exhibitions. Ron was the artist in residence for the long-running A Hundred Gourds Journal and continues to promote haiga through the Australian Haiku Society’s regular haiga competition. Ron’s first collection, The Bone Carver, won the Snapshot Press Book Award, the Haiku Foundation’s Touchstone Award an Honourable Mention in the Haiku Society of America’s Merit Book Awards. His second collection, Bushfire Moon, contains haiku and prose written about his experiences as a Tasmanian volunteer fire-fighter. Ron’s latest collection Broken Starfish brings together haiku from over twenty years of writing and publishing in leading journals. This collection also contains simple ink paintings by Ron that link and shift with the haiku. Both Bushfire Moon and Broken Starfish are available directly from Ron at ronmoss8@gmail.com

Originally from the Philippines, Jade-Ceres Violet Dolor Munoz now lives in Auckland with her husband and daughter. She was named Poet of the Year for the 1st Asia-Pacific Nick Joaquin Literary Awards in 2018. She started a movement in Auckland called Books on the Bus NZ – she and her husband have placed over 3,000 books in buses, trains, ferries, train stations and bus stops around New Zealand since starting it 2017. She is also an official Book Fairy in New Zealand. 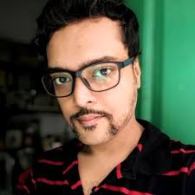 A poet and a father, Kushal Poddar edited a magazine, Words Surfacing, authored seven volumes of poetry including The Circus Came To My Island, A Place For Your Ghost Animals, Eternity Restoration Project- Selected and New Poems and Herding My Thoughts To The Slaughterhouse-A Prequel. Find and follow him here.

Patricia Prime is editor of Kokako and reviews/interviews editor of Contemporary Haibun Online, and she writes reviews for several journals including takahē, Atlas Poetica and Metvese Muse. She edited, with Amelia Fielden and Beverley George, the Australian/New Zealand tanka collection 100 Tanka by 100 Poets. Patricia was one of the editors of the World Haiku Anthology: A Vast Sky, edited by Dr. Bruce Ross, published in 2015. Her main poetry interests lie in the Japanese short forms of haiku, tanka and haibun. A collection of tanka sequences and tanka prose, Shizuka, by Patricia and Giselle Maya (France) was published in 2015. Patricia published a collection of her poetry, The Way of All Things, in 2019.