With office, home, and gaol rolled into one
And a view that ends at our garden gate
We all watch the clock with a wary eye
While we stand still, and hours still pass by

Rock bottom.
Ready for a good croon?
It’s that or the liquor…
too much of enough to not worry
down here in my apartment block.
The mail order guy is doing great,
the rest have rented bikes
& are delivering his meals.

This un-busy peace
another season.
My hands open then close
there is so much left to do in this world.
Friends are doing OK,
there’s talk of “us” again.

Sonnet for the Existential Crisies # 12 & 25 by Michael O’Leary

Yoko Ono once wrote ‘What’s the difference?’
In the days of Love in the Time of Covid Nineteen
In the lock-down daze: what’s the difference?
I’ll tell ya the difference was vast and extreme
In our human world of technology and greed
Of dreams and nightmares, of war and peace
The earth cried out this is more of what I need
Not running everywhere at speed and pace
There are birds in the sky now, not aeroplanes
The earth responds to the gentle rain that pours
Without acidic toxins poluting her mauri, her life-force
Cars no longer clog our streets and our lanes
The earth accepts from Cloud Nine and implores
People to look again before getting back on the horse

Stay At Home For Australia! by Kit Kelen

fix things!
create!
have a long ponder
be home and show you care

you can’t fight hypochondria with paranoia
but maybe the other way around?
… while you’re considering that
perhaps a lovely cup of tea, a chat?

so many ways to be at home
talk to the others
now equally far
and safe in their homes
(a great comfort, surely?) 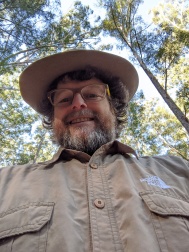 Published widely since the seventies, Christopher (Kit) Kelen has a dozen full-length collections in English as well as translated books of poetry in Chinese, Portuguese, French, Italian, Spanish, Indonesian, Swedish, Norwegian and Filipino. His latest volume of poetry in English is Poor Man’s Coat – Hardanger Poems, published by UWAP in 2018..

Manfred Malzahn was born in Germany in 1955. He studied at the universities of Bochum and Wuppertal, where he completed his PhD in 1983 with a dissertation on the contemporary Scottish novel. After civilian national service with the Goethe Institute, Malzahn went on to teach at universities in Scotland, Tunisia, Algeria, Malawi and Taiwan. In 1998, he joined the United Arab Emirates University in Al Ain as a Professor of English Literature. Besides producing a range of academic publications that deal extensively –though by no means exclusively – with Scottish literature and culture, Malzahn has also been active as a writer of poetry and short fiction, and as a musician and singer/songwriter with live performances and studio recordings in various countries. His latest literary output is a collection of poetry entitled Grey Flowers, recently published in Abu Dhabi.

Michael O’Leary was born in Auckland in 1950. He has written and published in many genres, including non-fiction, fiction and poetical works. His ambition has been to write and research on historical, literary and Māori topics and also to contribute to the knowledge and cultural wealth of Aotearoa New Zealand as a poet, novelist and artist. He has performed his works as a poet and with musicians. His latest novel Apocrypha Scripta has just been released. He has a PhD from Victoria University. More here.

Over 45 years Les Wicks has performed widely across Australia & internationally, with work published in over 350 different magazines, anthologies and newspapers across 30 countries in 15 languages. Steve Smart describes him as …one of the great Australian performance poets. He conducts workshops around Australia and runs Meuse Press, which focuses on poetry outreach projects like poetry on buses and poetry published on the surface of a river. His 14th book of poetry is Belief (Flying Islands, 2019). More here: leswicks.tripod.com/lw.htm