As I pulled out of Harumi’s driveway in my rented Prius, a home-made bento for the road in the passenger seat, I looked in the rear-view mirror and saw her standing at her doorstep. Her body was bent in a deep bow, a kind comma snug in a white woollen sweater. In my mind’s eye, she straightened. Her grey hair tumbled from its bun and turned black again, falling round her shoulders, the way she’d worn it twenty years ago when I first met her and she called me Hannah-chan, except she said it the Japanese way, so both syllables rhymed like a lovely children’s song. Ha-na. I called myself Hana all through that winter. Every time I said it, I imagined I was a different flower, elegant instead of whatever I really was. Camellia. Sweet pea. Plum blossom.

I imagined this younger Harumi waving at me, driving away from her; I imagined we were back in Sapporo and I was on my bicycle. In those days it had not seemed a prudent decision to buy a car, even a second-hand one, when I was only here for a semester on exchange from Singapore, even though everyone had told me I’d be wasting my time in Hokkaido if I didn’t go driving round the countryside. The real reason I regretted not getting a car, in the end, was that Harumi walked an hour every day to the grocery store she liked in Higashi-ku by the Toyohira River, where she had grown up. If I’d had a car I could have driven her there. She always said it was fine. She liked walking. She used to take this walk with Nozomi on weekends.

And I imagined her now, Nozomi, walking up the street to her mother, past the empty houses and restaurants with their shutters down. Seventeen, dressed her high school uniform with her hair in a braid, just like in all the photos in her childhood bedroom. Back then, I’d stayed in that bedroom for six months and Harumi had never gotten around to clearing Nozomi’s things out of it. She had been so apologetic: it was a shame upon her, as a homestay host, that her daughter had been married over a year and her old room was still in such a condition for guests, but she didn’t have anywhere else to store these items and Nozomi might want them someday.

I didn’t mind. It was like having a roommate, except even better because she was never around. I lived with the illusion of someone for company without having to worry about them blasting music, coming home late, or wanting to chat when I didn’t feel like it. I’d sit in her swivel chair and look at Nozomi’s school picture on the desk, her certificates of academic achievement framed on the walls, all the luminous stars she stuck on the ceiling. A plastic harmonica in her dresser drawer that I could still play Twinkle Twinkle Little Star on. A signed Arashi album. Nozomi, I’d say, out loud. She was a good partner for conversation practice. Somehow, I felt we were past honorifics, being such close roommates. Nozomi, today I sat in Odori Park and ate a freshly roasted sweet potato. It gets dark so early, not like in Singapore. Nozomi, do you ever bring your husband and baby there? Nozomi, do you still like boybands? Are you happy?

For a moment, the imaginary shape of Nozomi walking up the pavement fogged in my mind, turned into an older version of herself I’d never known. A woman with her hair cut short now, into a practical bob. Dressed in linen and cream, one child on each arm and a third tugging the hem of her skirt. The further I drove down Niseko’s deserted main road, the more Harumi, too, became a blur in my mirror. I seemed to be the only person moving in the entire town. All these ski and snowboarding shops shut for spring, with signs that read BACK IN OCTOBER hanging from their doors, vending machines covered in frost and leaves, a fresh blanket of white upon the kerbside. The cherry blossoms would have started to bloom in Tokyo, but here they were still a good month or so away. No stirrings of life, not even a bracing winter wind. Niseko in April was like a village in a snow globe after the snow was done falling. Gathering dust on the shelf. And there was Harumi in her driveway, far away enough now that I could imagine she wasn’t looking at me anymore. She was looking at Nozomi, coming down the road, and they were twenty years younger and Harumi and I had never met and I shouldn’t even have been here, because Nozomi had never gone and got married at such a young age, and she had gone to university like her mother hoped she would.

I didn’t have to try too hard, to picture Harumi at eighteen. She’d shown me photos, many years ago. High ponytail, serious eyes and a too-long skirt, her face so smooth it would have taken me a week to draw in, one by one, lovingly, all the wrinkles on it now, all the wrinkles that had crinkled so beautifully when we had tea and sweets together not half an hour ago. Every year another line in this story: a schoolgirl with ambition, who never knew she would become a single mother far too young, who had wanted her daughter to be everything she couldn’t be.

Harumi never told me they had fallen out. Only, Nozomi never came to visit, and Harumi never went to see her grandchildren. A few months after I left Japan, she sold her house in Sapporo and opened an izakaya in Niseko. Every January would bring a New Year card from her in the post. 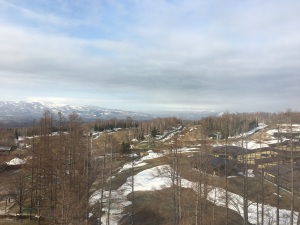 Over kinako dango, we talked of that grocery store in Higashi-ku, of the Sapporo ice festival, of the visitors Harumi saw in her restaurant during tourist season. Always plenty of Singaporeans, she said. It makes me miss you, Hannah-san. Now that I was older, I guess she didn’t think it was right any more, to call me Hannah-chan. Her new house was much smaller than the old one. There were no photographs in sight, and the only decoration on the walls was an ink painting of a solitary crane by a river, moonlight pooling at its feet. That scroll used to hang above Nozomi’s bed. She had painted it in her second year of high school.

I didn’t even know if Nozomi had three children now. But that was how I imagined her. She would be my age exactly, and that was how forty-year-old women lived, they had three children and perpetual eyebags. I had the eyebags. They had only grown worse, from my time as a student. Harumi did not comment on them. She looked at my ringless finger and remarked, how wonderful it was to see me all grown up, and in a good government job. Had I stayed with the civil service all these years, after graduating? Yes, I said. I had. My life had been terribly dull. She smiled and refilled my tea. Beyond the window, a fresh flurry of snow was beginning to descend. The sight was so like the view from Nozomi’s bedroom in Sapporo, with the oak tree outside and all. I wondered what had become of the harmonica. Even if Harumi had kept it, and all of Nozomi’s other stuff, I didn’t know if I remembered how to play it any more. 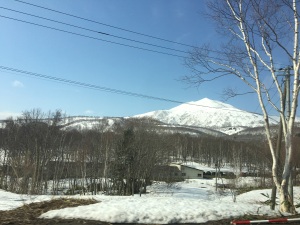 Won’t you stay the night, Harumi had asked me. The truth was, I had not booked a room at my next stop near Lake Toya. My overnight clothes were in a separate duffel in the boot of my car. But in the end, I clasped my teacup and I looked at the twigs floating in my houjicha, and said Harumi-san, you’re too good to me, I really shouldn’t. That was how I drove out of Niseko, the town a long, slow exhale behind me. Just waiting for the winter, waiting for the ski slopes to come back to life, for time to start its inexorable march again. Harumi grew smaller and smaller in my rear-view mirror until I couldn’t see her anymore. Later, when my friends asked about my nostalgia road trip, my first time back to Hokkaido in twenty years – what a fun holiday it must have been, with no husband or children to drag around – I told them, sometimes, you missed something so much you had to make sure you never saw it again. You had to put it in a snow globe and keep it safer than life.

Cuifen Chen was born and raised in Singapore where she now lives and works, having spent time abroad in the UK and Australia. Her fiction has been anthologised by Ethos Books/Margaret River Press and Regulus Press, while her poetry has been published in Southeast Asian Review of English and her creative nonfiction in the leading international journal Fourth Genre. Cuifen was the winner of the Troubadour International Poetry Prize 2018 and the Literary Taxidermy Short Story Competition 2019.